Blog 32: An Interview with ‘In the Depths of Darkness’ Author Sean Fletcher

Q1) Briefly, how would you describe ‘In the Depths of Darkness’ to someone who hasn’t read any of your previous work?

In the Depths of Darkness follows a group of outcasts blackmailed into joining the oppressive Earth Alliance army, only to discover they’re the test subjects for an advanced neural Chip that will make them into super soldiers. If they survive. But once the rest of the galaxy finds out they have the Chip, they are forced to go on the run and find somewhere—anywhere—safe.

It’s a YA Star Wars meets Firefly with some Ender’s Game thrown in.

Q2) How long did it take for you to finish and publish ‘In the Depths of Darkness’?

This was my most ambitious project to date. Book one took me about six months to write and do my edits on. Then another 2-3 months to have readers/editors take a look and input their edits. I was actually done with it near the middle of 2016, but I held off to release it so I could get the second one started. I haven’t released Book 2 yet, but it’s done, and I have just a little editing left before letting other people look at it.

I didn’t always want to write. My parents (blame them) got me into reading very early and I was voracious at that. Eventually that love turned into wanting to write a book myself so when I was fifteen I sat down and wrote one. Since then I’ve written 2~ books a year, but it wasn’t until I was in college that I seriously considered trying to make writing full-time a goal.

Q4) Many writers, particularly young writers, have difficulty convincing their parents of their career choice. Have you found this, or society’s expectations, a problem?

HAHAHAHA!! Yes. Yes I have. Society isn’t the most understanding of an atypical career path, but not necessarily in a cruel way. I still get the vacant stares or politely surprised expression when I tell someone what I do. I think most people don’t understand the joy that comes with creating and being immersed in a creative environment. And I understand that. It’s isn’t a job for everyone. Not everyone can (or wants to) write for money. Writing as a job can be a scary experience, and doesn’t have the same cushion as a ‘stable’ 9-5 (though I’ve known many people with 9-5’s that weren’t nearly as safe as they thought). My parents were hesitant (that’s putting it mildly) when I struck out to try to write full-time, but they are still my biggest fans, and I’m lucky enough to be surrounded by many like-minded individuals who support me on this journey.

Depends on where I’m at with a specific project. If I’m writing the first draft of a book then I spend a couple hours in the morning and evening before and after work writing the book longhand before typing it all in. If I’m editing a book I’m doing that instead, and inputting those edits. I stay relatively consistent with how much time I spend per day. I treat it like a job, because I want it to be. You have to have discipline if you want to be successful. I know some authors who say they can write 8 hours every day, but for me, four is about my max, and no more than two in one sitting.

Q6) Is there a specific message, theme or idea that you wanted to get across to your readers with ‘In the Depths of Darkness’?

I don’t usually start with a theme for my books; those just kind of come out when I’m done. For this book I’d say the theme is: Being a hero is not always defined by the grand deeds and glory you attain, but rather the small acts done selflessly.

There’s also good vs evil, the corruption of power, etc.

Q7) Are you currently writing or planning to work on a new novel and when will it be ready?

The sequel to In the Depths of Darkness will be out Spring of next year. I’ve started the third book in the series and that’ll come out at the end of next year. But at the moment I’m actually tackling a different project and working on a MG fantasy. I write both YA and middle grade and like to switch off to give my mind a break from one or the other.

Q8) What do you feel is the best piece of writing advice that you have learnt to date?

Learn the rules of writing and then learn when/how to break them. For every ‘law’ of writing there’s a bestseller that’s broken it. There are some rules that are there so readers can actually understand your book, but other rules can be modified in new and fresh ways to create new and fresh stories.

Q9) What inspires you?

Q10) In this modern age of self-publicity, which social media platforms do you use and find the most useful?

Q11) What novel have you read that you wish you had written?

Something Wicked This Way Comes by Ray Bradbury

Q12) If you could be a character in any novel you’ve read, who would it be?

Um…I can’t really think of one.

Q13) Have you ever fallen in love with a character of your own creation?

Love in the sense that I’d love to hang out with them. Most of my characters I try to make real and relatable, so they end up (at least for me) being people I’d just want to meet them with and go on adventures with in real life. Plus they also share my humor. Isn’t that weird?

Q14) Do you have any favourite novels or authors?

I actually don’t follow authors as much as I just like good books. I am a fan of Neil Gaiman, but other than that my favorites vary widely.

Q15) If you could travel to anywhere in the world where would it be?

Nope. Maybe I’ll have cats one day and be the quintessential ‘author with a cat’.

Q17) What is your favourite food/beverage?

Q18) If you could have dinner with anyone alive today (famous or not) who would it be and why?

I…don’t actually know. There are many people I wish I could have dinner with.

Q19) If you had a single trip in a time machine where would you go?

Back to when the T-Rex walked the Earth. As long as I could get back.

Q20) And lastly, can you tell us a random fact about yourself?

I write all my books’ first draft by hand with a fountain pen.

Thank you to Sean Fletcher for taking the time to answer all these questions, your answers were extremely entertaining and honest. If you would like to know more about Sean and his works then click on the links below. 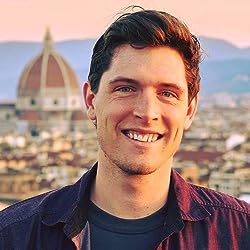 Buy In The Depths of Darkness