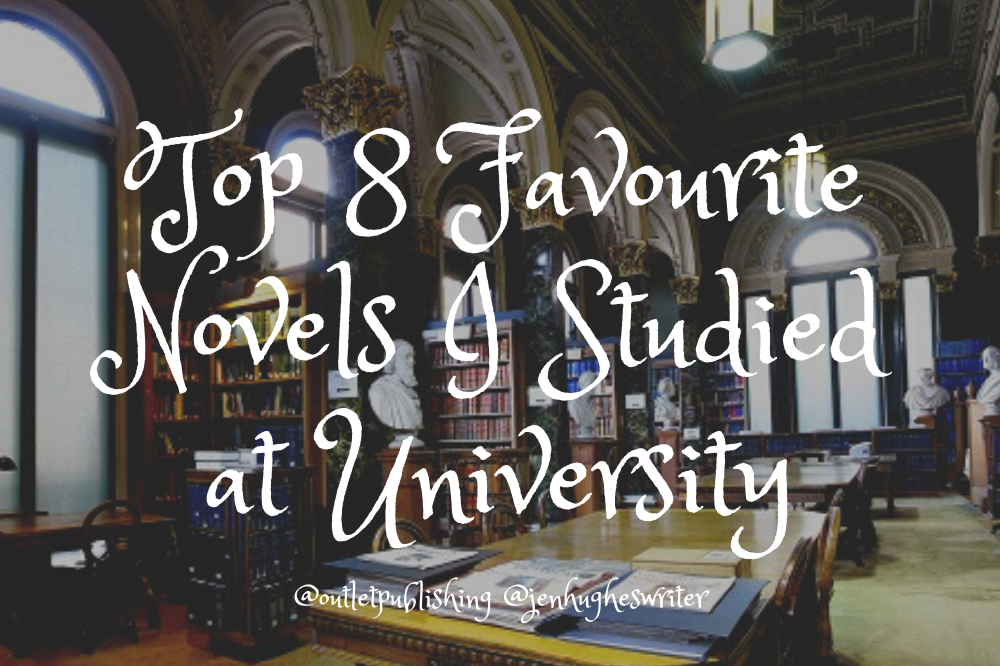 As part of reflecting on my experiences at university, it would be bizarre not to include discussions about the novels I studied as part of my English Literature degree. We studied a wide range of texts, including plays and poetry but for the purposes of this post I’ll be focusing solely on the novels. Because each novel I’ll be talking about is so different, and resonated with me in different ways, I couldn’t bear to put them in a hierarchy as would be expected in a top list. So, I’ll talk about them in alphabetical order because I feel like it. Let’s go!

In 1816, the year without a summer, Lord Byron invites his friends to sit around his fireplace and challenges them to write their scariest story. So, an eighteen-year-old Mary Shelley pens Frankenstein, a novel that sees Dr Victor Frankenstein create a man by assembling a man from corpse parts and uses electricity to bring him to life. When he realizes what he’s done, he rejects the monster and leaves him to die.

Frankenstein has been a monster movie staple for almost a century now. When you think of the Monster Mash, you can imagine Frankenstein’s monster boogieing along. But the monster (called Adam) is racked with angst, and Dr Frankenstein is a pathetic loser.

It’s also considered the first science fiction novel, as it explores the fear of futuristic technology and science and how these advances will change humanity. The novel is told from multiple perspectives, both Dr Frankenstein and Adam and bookended from an outsider who talks to Dr Frankenstein.

I found Adam’s narrative the most interesting, especially considering Frankenstein’s monster is portrayed as more of a beast than a man. Out of all the characters in the book, Adam feels the most human. He seeks acceptance from society, but they shun him because of his appearance. Spurred on by a lifetime of rejection, he seeks revenge of the man who created him. It is that humanity that distinguishes it from other sci-fi cautionary tales and sets a precedent for explorations of the human condition in science fiction. I know it’s something I aspire to with my sci-fi stories, anyway.

Geek Love is an incredibly engaging read, where narrator Olympia recounts her youth as part of her dysfunctional family’s freakshow. The A plot is set in the present day. She cares for her mother, Lil and daughter Miranda in their apartment block, whilst neither of them knows that they are related to her. The B plot is set in her past, the family history that Olympia writes to pass onto Miranda when the time is right. Throughout the story, we’re aware that she will have lost her home in the freakshow, but we don’t know how she loses it until the climax of the story. I won’t tell you how, though, you’ll need to read it yourself, but it is truly heart-breaking. The best part for me is the characters and how their relationships evolve over the course of the book.

I hope that it’s not just my university that considers this a modern classic, and that this book isn’t lost to time because it’s one of the best books I’ve read so far.

I was raised on adaptations of Charles Dickens works. My Nana was a huge fan of him and one of my favourite films is the 2002 adaptation of Nicholas Nickleby (1839). As much as I’m aware of the flaws in Dickens’ works, they’ll always hold a place in my heart. Charles Dickens tends to write stories that portrays the oppression and suffering the working class endure, caused by a society that looks upon them contemptuously. His stories aimed not only to paint vibrant characters but to use their very human stories to move his audience in the upper classes to action. They were also originally published as serials to make it more accessible to the working-class readers he advocated for, which explains why his novels are so long and wordy.

I covered Great Expectations in my final year at school, so I was pretty familiar with it going into it in my first year of university. The son of a blacksmith, Phillip ‘Pip’ Pirrup becomes the emotional punching bag to the cold-hearted Estella and falls in love with her. As a young man, he is given an allowance to pursue life as a London gentleman. In the pursuit of Estella, he shuns the people in his life who love him especially Joe Gargery. Joe is my favourite character and father figure for Pip. He deserved better, but after Pip realizes that the pursuit of wealth is meaningless, he seeks to make amend.

The adaptation from 1949 directed by David Lean is the best place to start, if you’ve got too much on your reading list. It captures the desolate world Pip inhabits so well, and the pivotal scene where Pip gives the escaped convict Magwitch a pork pie and some water is incredibly made. The South Park episode adapting Great Expectations is really funny, and it’s a shame they haven’t done more episodes about literature.

This was a few texts that were required reading for my Creative Writing Fiction course in 3rd year. It’s a post-modern novel that’s structured like a short story collection, in that each of the five chapters/sections is from the perspective of a different narrator. These stories are set in and around the Global Hotel, and mostly centre around the death of chambermaid Sara Wilby.

My favourite part was her section. In this first part, it’s from the perspective of her ghost trying to retrace her steps and find a way to the afterlife. I love the part where she and her decaying body reunite, and are different people. It’s macabre, but something I had never seen before. The themes of the novel are death and grieving, which are some themes that I’m exploring in the short story collection I’m working on.

In my second year in university, my attendance was abysmal especially for English Literature. I could barely get out of bed, let alone attend morning lectures. I did attend a few, but it took a lot of mental effort to get out the door. The lecture that took place was conducted by Rob Maslen, who runs the Fantasy postgrad course whose lectures have always been my favourite.

Alistair Gray is a pretty beloved figure in Scottish literature, especially among my poetry scene in Glasgow. He painted the mural on the ceiling of Oran Mor, a bar in the west end that was converted from a church. I’ve had my share of drinks and gigs there, and I highly recommend you check it out whenever you’re in the city.

In Poor Things, Gray acts as an editor or collator of historical documents: Archibald McCandless’s autobiography, “Episodes from the Early Life of a Scottish Public Health Officer,”, the letter written by the book’s love interest Bella Baxter/Victoria, who refutes most of the book’s points as complete fiction, and an epilogue containing some historical context of Glasgow.

I don’t want to go too deep into plot details, as I want to avoid spoiling details that are best consumed reading it blindly. But the book within a book is an amazing homage to the Gothic novel, especially Frankenstein, and it’s structured alongside other accompanying texts to give it context.

There’s also a movie adaptation coming out this year that I am so excited for, so if you’re not for reading you could watch the movie when it comes out. But honestly, don’t skip this one. It’s a pretty accessible read as well as an intellectual one. Well, what are you waiting for?

Things Fall Apart was the first African novel I had ever read. It is Chinua Achebe’s debut novel and the book Nelson Mandela took solace in while he was incarcerated. It is a tragic tale of Okonkwo of the Igbo tribe and the family of which he is chief, painting a picture of their culture and relationships before they are taken into slavery by the white men.

I found the characters’ family dynamics and look into precolonial Africa very compelling, especially considering how little I know about it. There is a single narrative of Africa that we are presented with in the West that Africa is a poor country, ruled by corrupt dictators and torn apart by war. But what we overlook is that Africa is a continent made up of many countries each with their own cultures and history. As much as war and poverty is a part of African nations, there is so much more to them than this. We don’t tend to think about this in the West. I hate to admit this, but I had no idea just how vibrant their cinematic culture is or that they had cinemas until we covered it in my film course. It’s something I feel pretty bad about, and I still have plenty to learn. But for me, Things Fall Apart was the start of that journey.

I watched a TED Talk a few years ago by Chimamanda Ngozi Adichie called The Danger of a Single Story which explains this a lot better than I could. Check it out here.

If you’ve got any African texts or films you recommend, get in touch and I’ll add it to my reading list.

My time at university gave me the opportunity to read books and watch films and TV shows that I would never have found otherwise, and I feel I’m a better writer for it. Having said that, because most of my reading muscles were spent on course texts and seminar readings, I was left little room to read for pleasure. When your mental health is shot, it’s more difficult to concentrate on things and for me that included reading and watching films and TV. I hope that in 2022, I can read a whole lot more for pleasure. I have a lot of books on my bookshelf to read, so I better get started.

Jen Hughes is a writer and poet from Ayrshire who has been passionate about writing since she could hold a pencil. She is in her final year of her English Literature and Film & TV Studies degree at University of Glasgow. She has been performing her work for four years and has been co-hosting open mic night, Words and Music, with Gayle Smith for two years.  Her fiction and poetry have been published in various magazines and anthologies including Acumen, Poetry in the Time of Coronavirus (PITTOC) Volumes 1& 2, Adjacent Pineapple and more.

Her debut chapbook, “Keep on Spinning” has been published by Dreich Publishing. It is available to buy on her website through jenhugheswriter.com/shop.