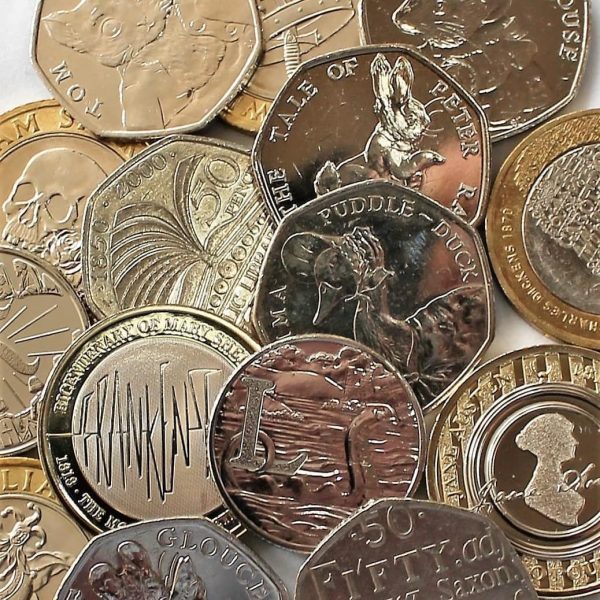 I’ve been collecting Literary and Science themed coins for the last several years. I collect circulated and uncirculated 10p, 50p, and £2 coins from the U.K., Gibraltar, Isle of Man, Guernsey, and Bailiwick of Jersey. I decided on sticking to themes for my coin collections but unfortunately for my bank account, more and more coins are being released with literary connections every year. Here are all the 50p Literary coins I have collected so far… 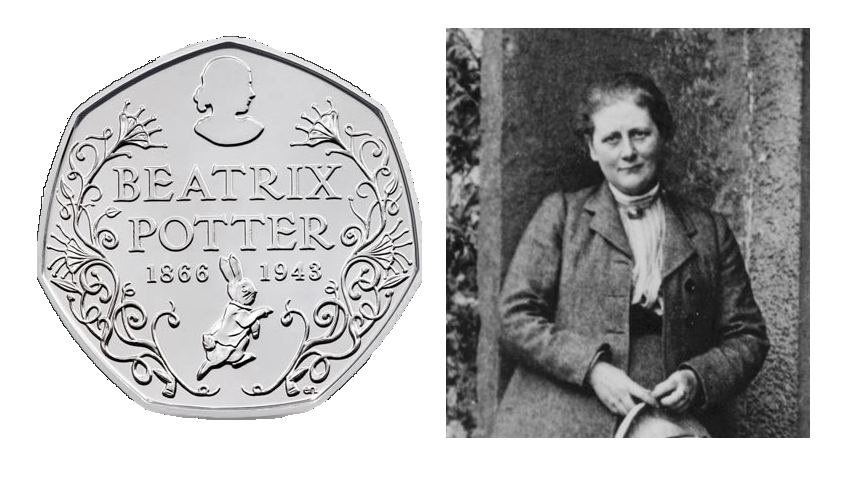 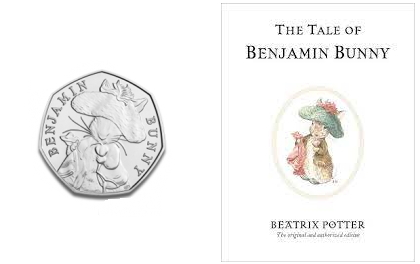 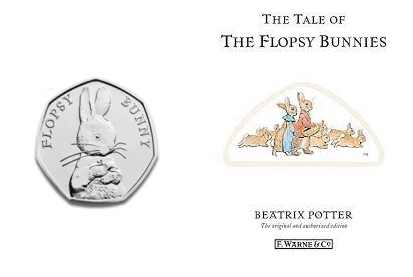 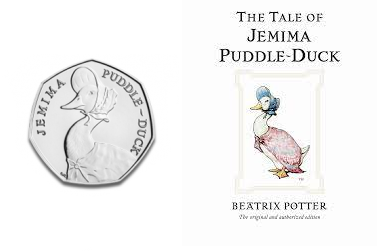 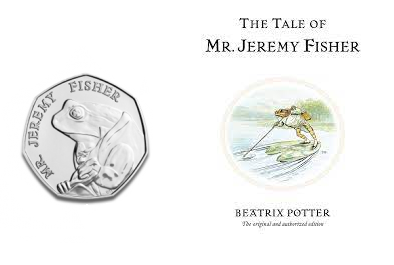 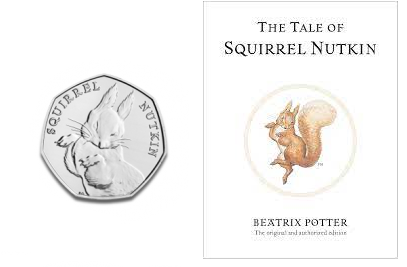 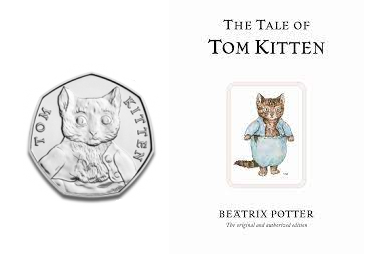 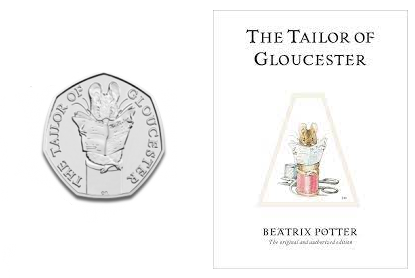 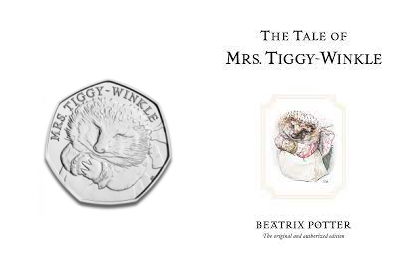 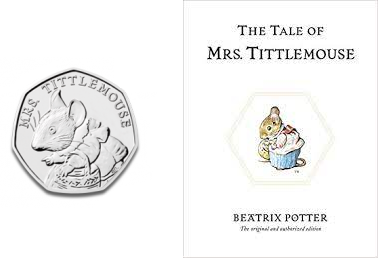 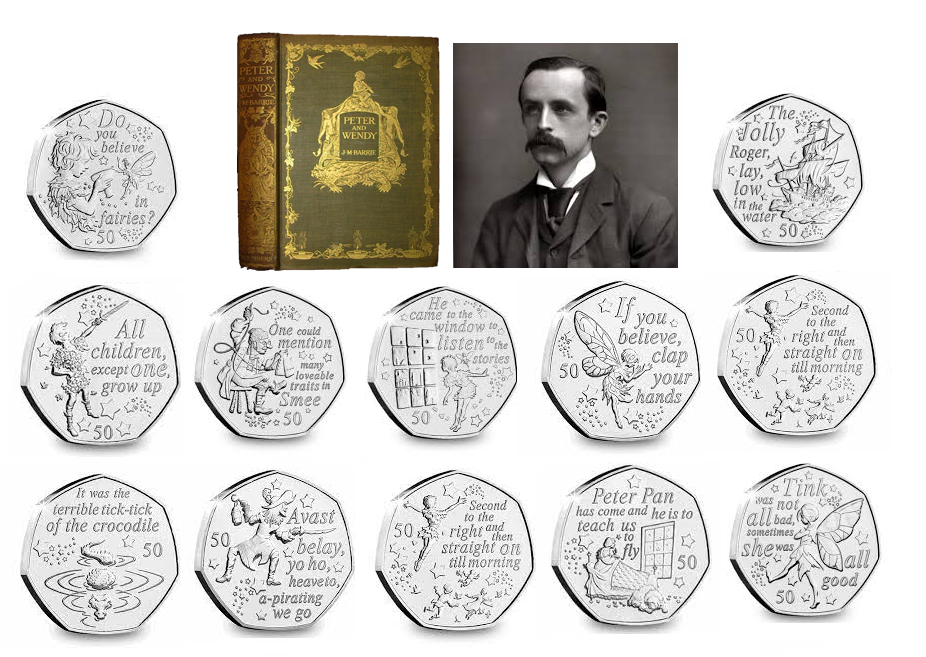 In 2019, The Isle Of Man released six Peter Pan 50p coins which included; Flying, Peter Pan, Hook, Wendy & Nana, Tinkerbell, and Crocodile. In 2020 a further six coins were released; Peter Pan and Tinker Bell, The Mermaid, Smee, The Jolly Roger, Peter Pan at the window, and a second Tinkerbell. 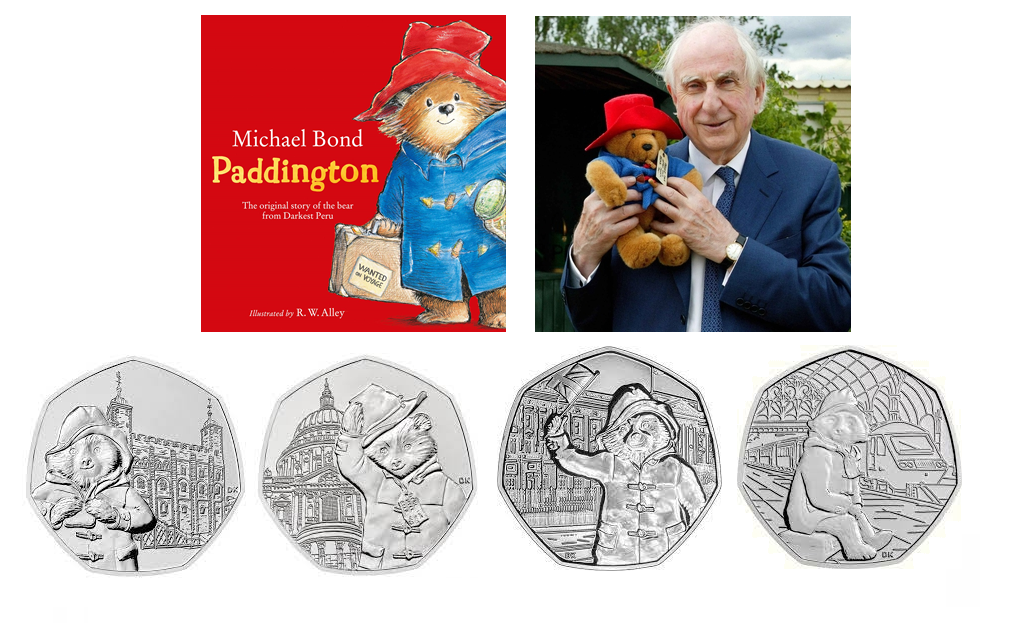 Michael Bond was a British author, best known for his series of fictional stories for children featuring Paddington Bear. 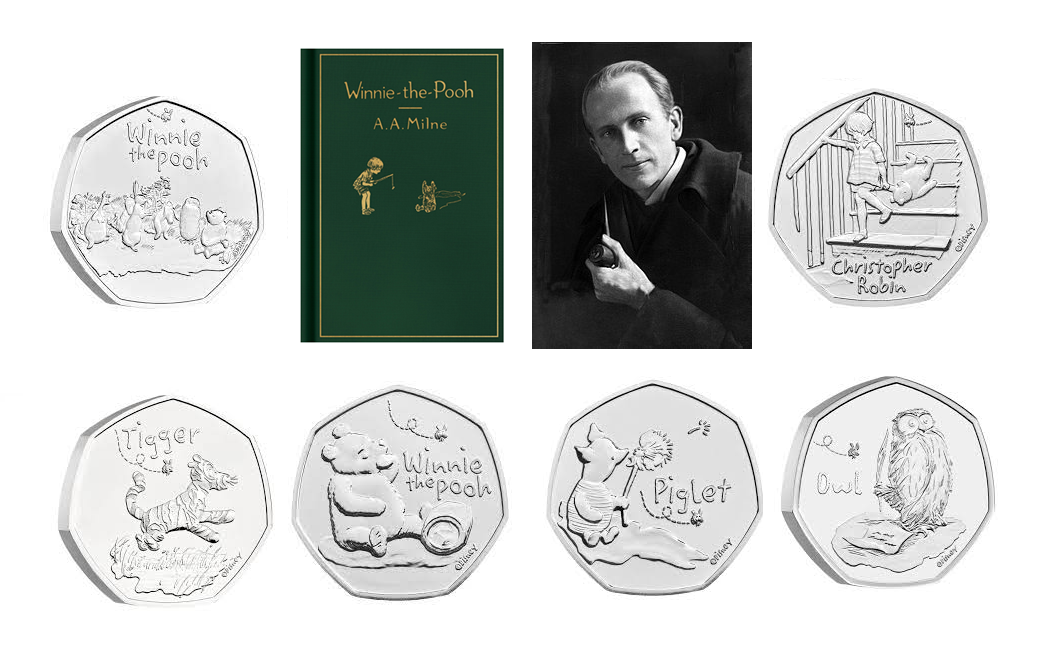 A. A. Milne was an English author, best known for his books about the teddy bear Winnie-the-pooh.

In 2021 Gibraltar produced two 50p coins from The World of David Walliams; The Boy in the Dress, and Mr Stink. Billionaire Boy and Gangsta Granny were just recently released in 2022 (currently have them on order). 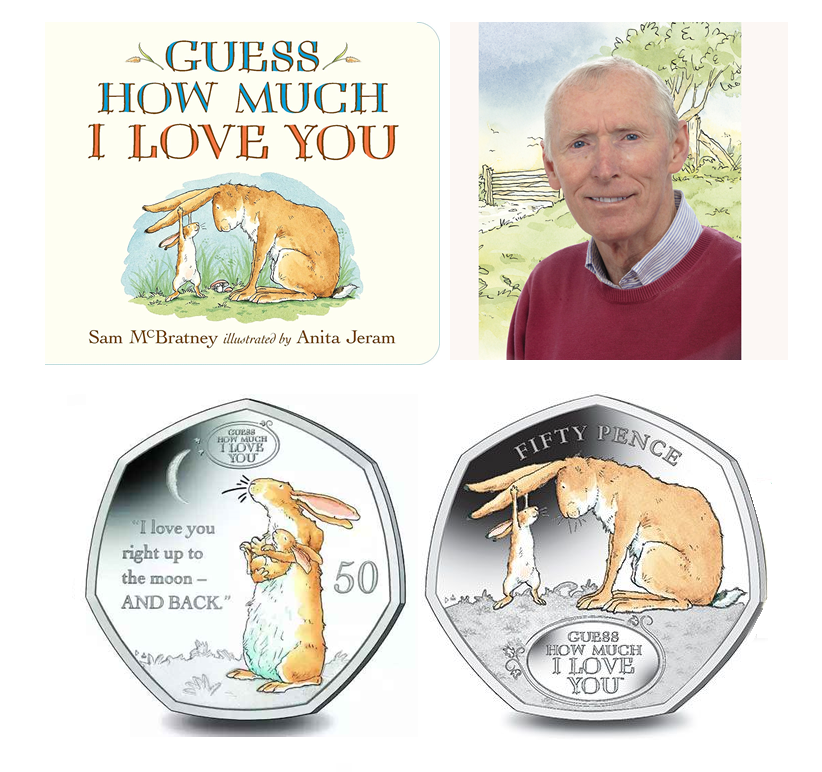 Sam McBratney was a writer from Northern Ireland, best known for his best-selling children’s book Guess How Much I Love You.

Gibraltar released the first ‘Guess How Much I Love You’ 50p in 2020, the second 50p which features the moon was released in 2021. 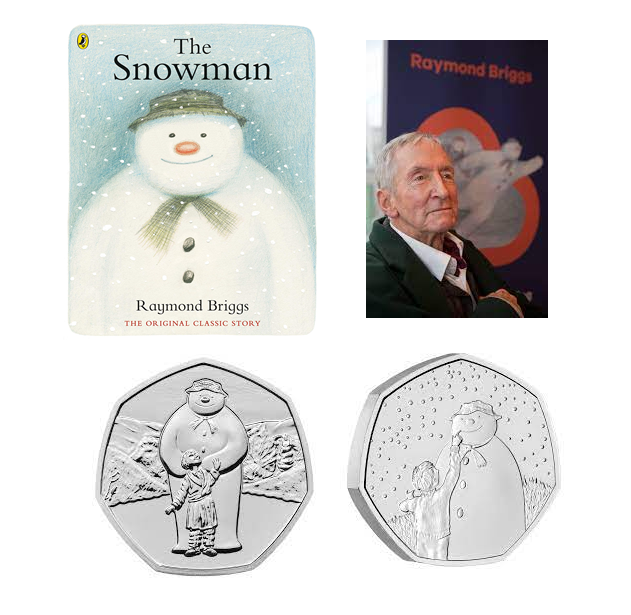 Raymond Briggs is an English illustrator, cartoonist, graphic novelist and author, best known for his story The Snowman. 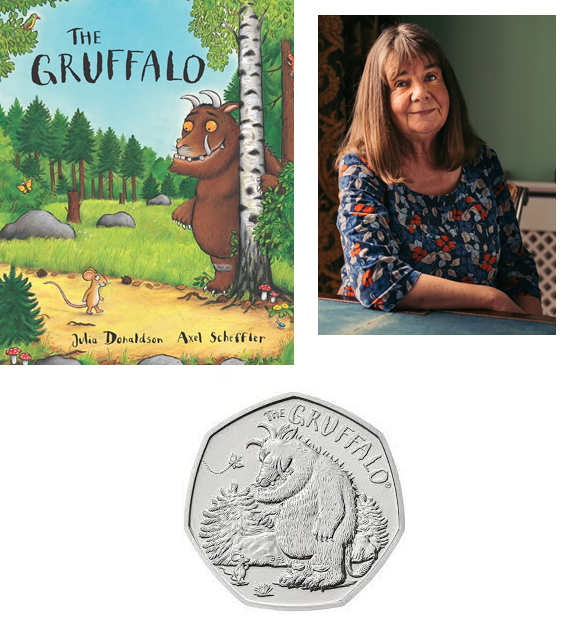 Julia Donaldson is an English writer and playwright, best known for her popular stories illustrated by Axel Scheffler; The Gruffalo, Room on the Room and Stick Man.

Two Gruffalo 50p coins were released in the U.K. in 2019, one featuring a close up of the Gruffalo (one I don’t have yet) and the other featuring The Gruffalo and the mouse. 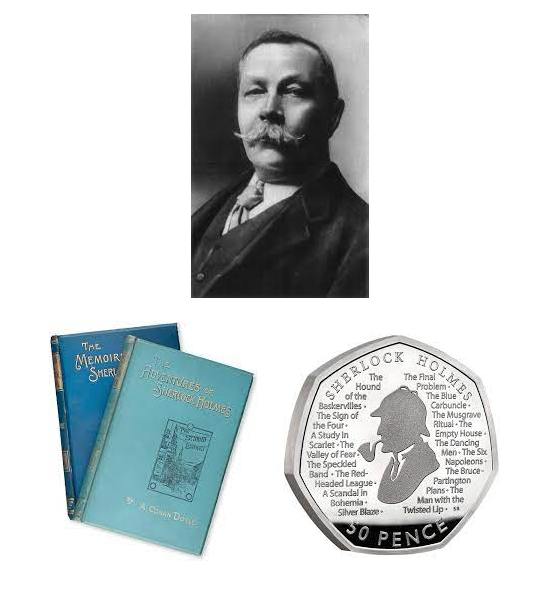 Arthur Conan Doyle was a British writer and physician who is best known for creating the character Sherlock Holmes in 1887.

To celebrate the 160th anniversary of Arthur Conan Doyle’s birth, a Sherlock Holmes 50p was released in 2019. 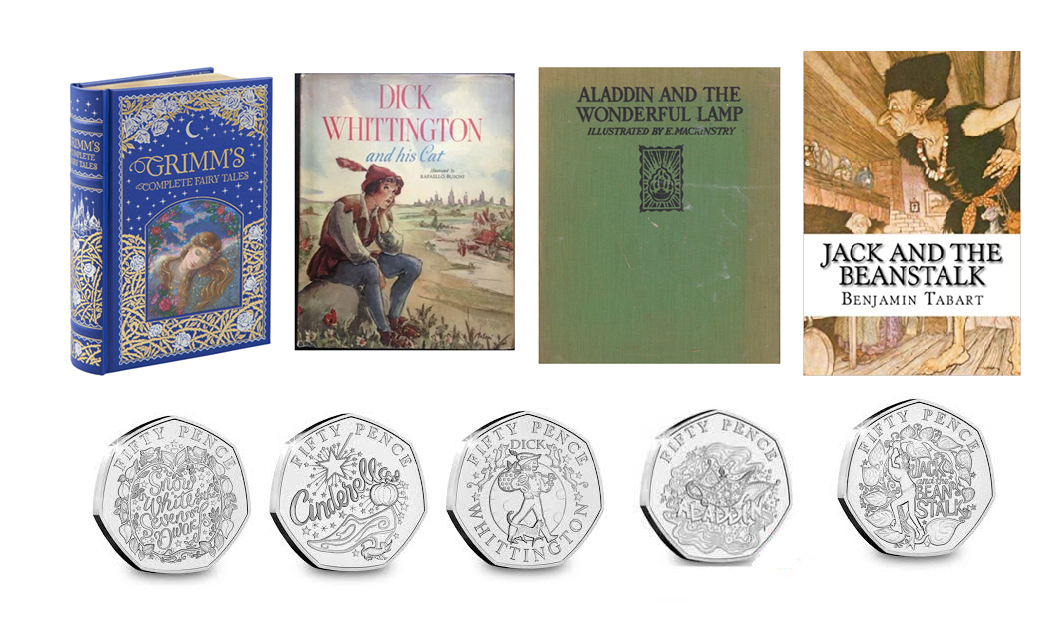 In 2019, Guernsey released a Pantomime themed 50p set including; Snow White, Cinderella, Dick Whittington, Aladdin, and Jack and The Beanstalk.

Snow White and Cinderella are both tales from the Brother’s Grimm. Dick Whittington was originally Dick Whittington and His Cat based on the real life Richard Whittington, written forms of the tale date back to the 1600’s and a chapbook called ‘The Famous and Remarkable History of Sir Richard Whittington’ was published in 1656. Aladdin is a Middle-Eastern folk tale associated with ‘The Book of One Thousand and One Nights (The Arabian Nights)’, despite not being part of the original text. There have been many retellings of the tale since the 1700’s. Jack and the Beanstalk is an English fairy tale which first appeared as ‘The Story of Jack Spriggins and the Enchanted Bean’ in 1734. 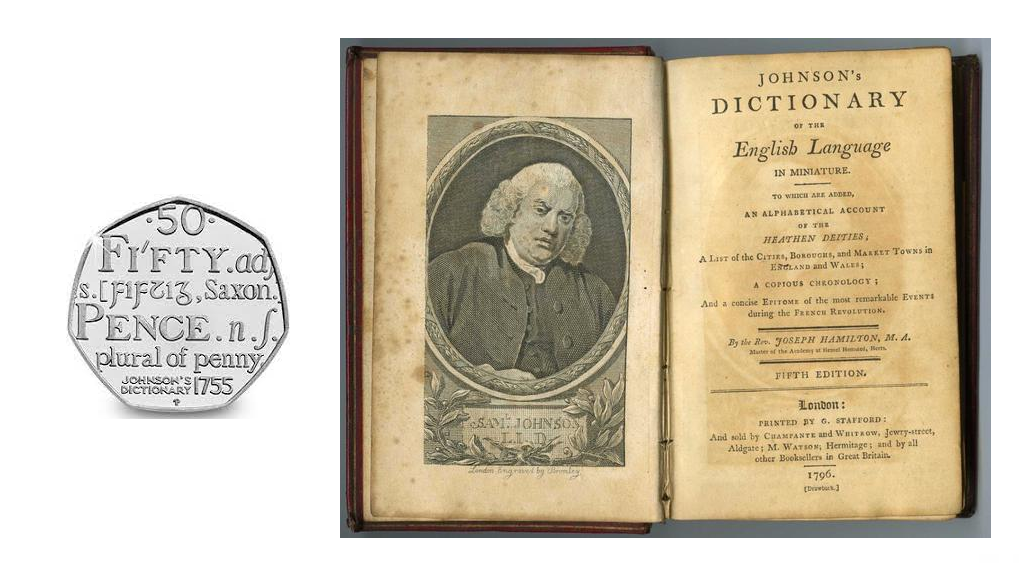 To celebrate the 250th anniversary of the Dictionary’s publication, the U.K. released this coin in 2005. 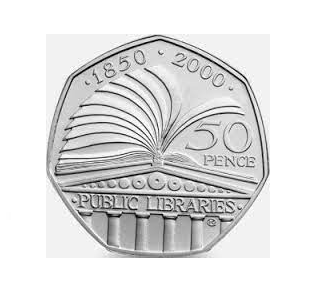 The Public Libraries Act 1850 was an Act of the U.K. Parliament which first gave local boroughs the power to establish free public libraries.