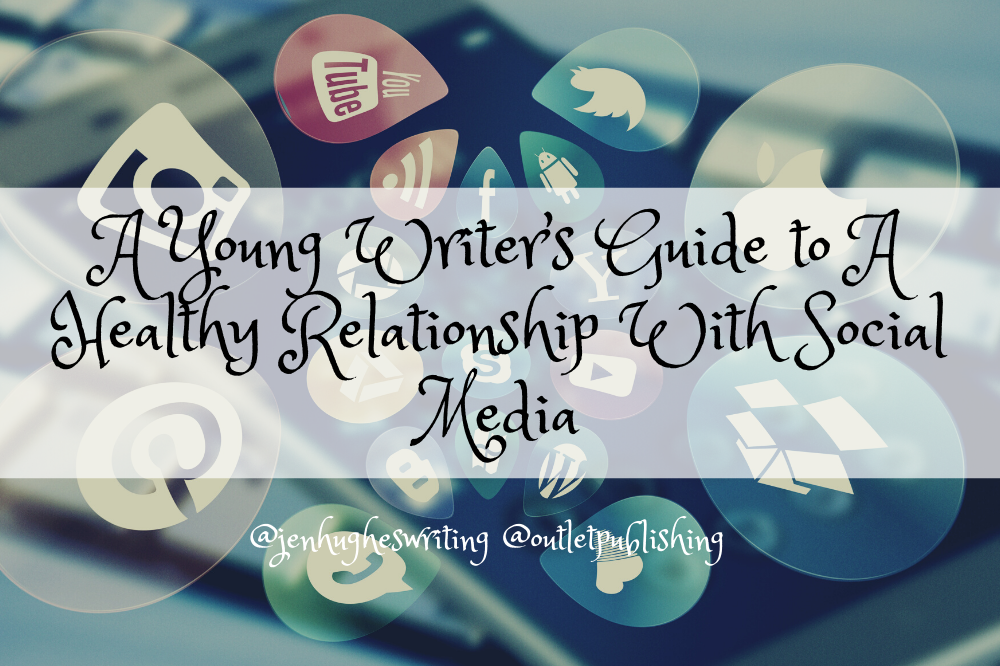 Blog 137: A Young Writer’s Guide to A Healthy Relationship With Social Media.

It was 2009. When I noticed some of the cool girls in my small primary school had made a Bebo account, I thought I’d give it a shot. I had fun with it, but I drifted from Bebo to Facebook when I started secondary school as more people were using it. In 2014, I became engaged in politics. I’m very much in favour of Scotland becoming independent and a lot of the Yes side were mobilizing on Facebook. I was still in secondary school, and watching history unfold on my newsfeed was exciting. Social media has a great way of connecting people and movements and arranging demonstrations, but I also saw a lot of people from both sides get into huge arguments in the comments sections. How little times have changed.

I started my website and my writing Facebook page in 2016, then a Twitter account about a few months later and an Instagram account in 2019. Over my time in that sphere, I have learned a few things that I would like to impart with you. Sadly, I don’t have any tips or tricks for getting more followers or engagement, but I am learning how to maintain a healthy relationship with social media.

Your social media is about you and your writing, so being authentically you is a good thing. Be proud of your achievements, talk about things that matter to you, talk to your audience, your friends and peers.

However, try to strike a balance. Potential employers, editors, publishers etc will see your social media, so it’s worth asking yourself when you post something whether or not you would feel comfortable with those people seeing it. If it’s not something you’re comfortable with everyone in the world seeing, don’t share it. There’s a real danger of putting too much of yourself out there and using your social media as a friend to confide in. Confessional blogs have their place and putting your personal life into your writing is inevitable, but it’s not healthy to overshare and it might come back to haunt you later in life. What you share on your social media is the first impression most people will get of you, especially if they haven’t read your work yet. If this is a balance you struggle with (I know I have), then you’re best to keep your personal social media and your professional ones separate.

If you have less things in your newsfeed that are triggering, you’ll be far more likely to have a better experience. It’s hardest to do on Twitter, but those who’ve been on their Facebook newsfeed recently will have noticed that every third post on Facebook is sponsored.

In my experience, Twitter will recommend you tweets that people you follow have liked, or even things some mutual followers have said that you didn’t ask for. I see Alessandro manage the Starter Quest twitter and this is something that still happens. He’s curated his feed well and only follows a few people, some YouTubers and other podcasts, so he hasn’t ran into the same nonsense I have.

You can also tune it to make sure you can efficiently keep yourself in the loop when it comes to the book world and opportunities that they might advertise. My Instagram does just that, especially considering I started following a lot of magazines and publishing houses so I can stay updated on new releases and submission openings.

The general rule of thumb I’ve been told is to post consistently at around the same time. An optimum time would depend on where you and your follower base are but that’s something for you to tinker with over time.

Scheduling posts has been a godsend for me, as it means that I don’t have to spend every day or every week making posts individually. It allows you to plan these out in advance over the space of a month or a few months. I use a software called ‘Later’ to plan out my Instagram posts and you can use it for Facebook and other social media too. Alessandro uses ‘Tweet Deck’ sometimes, but I didn’t discover scheduling until after I left the site.

I think we’ve all been there. We see another writer we follow doing great and being really productive, and then look at ourselves with dismay. They’re happy. They’re doing everything you “should” be doing. They’re making things happen and succeeding in that moment, and you’re not. Even if you are actually doing well, it never quite feels like enough.

None of us broadcast our writer’s block because we want to show how well we’re doing and that’s understandable. But I’ve said this before, and I’ll say it again: you shouldn’t compare yourself to a projection of another person in a good light.

That’s what a social media profile is, it is what a person wants to project onto the world and it will be different to who they actually are. Just like in the real world, you play different versions of yourself in different situations. You’re not exactly the same person you are at work as you are at home. You’re not exactly the same person with your friends as you are with your family, or even with your close family as distant family. Your virtual self will be different to your real self in some ways and, as long as you’re not using that to actively manipulate or hurt people, that’s okay.

That goes with statistics too, like your follower count or your engagement. It’s so easy to get caught up in numbers and wonder what you’re doing wrong if they’re not at the level you like. I’ve had years of bitterness and heartache staring at my metrics, even though in the big scheme of things it doesn’t matter. Each social media platform has its own algorithm that works in mysterious ways that I’m still trying to figure out. Feel free to experiment with different things, for sure, but don’t base your worth as a human being on your stats. It sounds so obvious it’s cliché, but it’s worth repeating.

I say ‘unnecessary’, because I’m not going to advocate you to avoid standing up against hate speech or if there is dangerous misinformation being spread.  What I will say is that if you’re going to engage in a debate online or stand up for someone, go about it deliberately and with the best argument you can put forward. Take time to cool down before you weigh in. Consider: is this a debate I can add to? Am I informed enough in the topic to make my argument better? Do I have time to verify a source or use one to prove my point? Do I have the time or energy to weigh into this? Is this any of my business?

For example, I found Twitter very fast paced and hot-headed. It’s too easy to say your piece and get angry about certain things. I didn’t set foot into political or “SJW” twitter, but I’ve heard horror stories. I wasn’t getting into blow-up arguments or resorting to insults on the regular but there were debates I had that left me feeling frustrated and exhausted. The final straw for me was when I rushed in to defend one of the actors I followed in an argument. Then they told me to back off and explained that it was just banter between him and one of his co-stars. They were very nice about it, and I apologised profusely. And that was it. I was so ashamed I couldn’t face the site again. They’ve probably forgotten about it now, or at least I hope they have, but I feel ashamed even typing this out.

When I made a new Facebook profile, I didn’t re-follow most of the pages I was on once. The comments sections on there are just as bad, especially on political pages. I’ve managed to avoid this problem on Instagram because I’m relatively new to the site, my newsfeed is well curated and I’ve learned not to wade in when it’s not my business.

Always remember that there are some people who are saying horrible things because they want to get a reaction out of you. They thrive from negative attention. If you say nothing to them, they’ll not be getting the thing they want. Although you need to stay true to yourself and your principles, there is a danger of appearing unprofessional if you’re engaging frequently in heated arguments online. You’re best treating people how you’d like to be treated yourself and that applies online and offline.

In text form it is impossible to distinguish what tone a person is speaking in. Not everyone is going to understand the context or nuance behind what you’re saying and people who have done this have ended up in hot water. Some jokes made in the company of friends won’t land when you’re saying them online to a bunch of strangers. As a general rule, I’d steer clear of offensive humour, unless your dark sense of humour is something you’re well known for. So many problems have arisen from these kinds of misunderstandings, and people have a bad habit of assuming the worst of people based on jokes they’ve made in the past. Sure, those jokes are worth criticizing, but we’ve all made a tasteless joke on social media from time to time and we grow and change as people. I wouldn’t want to be judged as a human being by those jokes, I hate that I even have to say this, but this is the society we’ve made.

When you start to get frustrated, stressed or anxious on social media, take a break from your newsfeed. Do something else to take your mind off things or talk to a friend. If you need to come off of a site altogether for your mental health, then do it. As long as you keep your audience in the loop with what’s happening, and where to find you if they need to contact you, most people are generally very understanding. And if they’re not, maybe they were not the audience you should want to court.

It’s 2022, and I’ve hit a bit of a brick wall when it comes to my social media management. The original draft of this blog post was a whiny mess, because at the time I was feeling really bitter and jaded about the whole thing. But who wants to read that? I wouldn’t. So, I’ve used this post as an opportunity to reflect on it. I’ll be taking a break from my social media for some time aside from some scheduled posts. I’ll be notifying people about Words and Music and sharing my latest podcast episode or blog post.

It’s worthwhile to remind you that navigating the at times dystopian landscape of social media is something that even after all of these years I’m still learning. So, hey, don’t be too hard on yourself.

Jen Hughes is a writer and poet from Ayrshire who has been passionate about writing since she could hold a pencil. She is in her final year of her English Literature and Film & TV Studies degree at University of Glasgow. She has been performing her work for four years and has been co-hosting open mic night, Words and Music, with Gayle Smith for two years.  Her fiction and poetry have been published in various magazines and anthologies including Acumen, Poetry in the Time of Coronavirus (PITTOC) Volumes 1& 2, Adjacent Pineapple and more.

Her debut chapbook, “Keep on Spinning” has been published by Dreich Publishing. It is available to buy on her website through jenhugheswriter.com/shop.