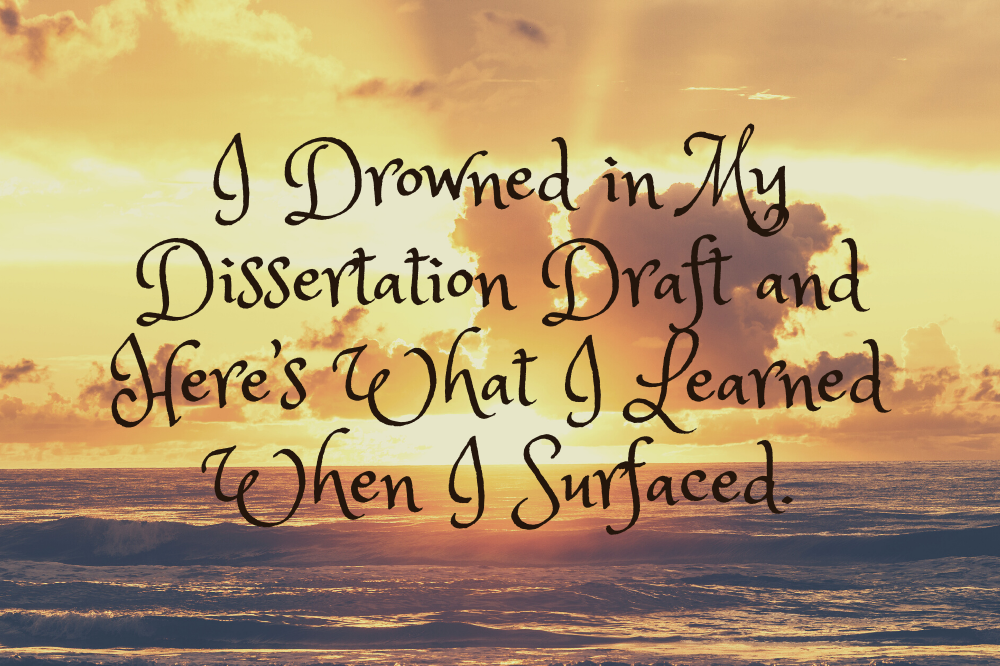 Blog 138: I Drowned in My Dissertation Draft and Here’s What I Learned When I Surfaced.

The dissertation is something that has been on the horizon for any student. I had wanted to do a creative writing dissertation since I knew it was an option and I was lucky that I managed to get in. I wanted to challenge myself. Instead of working on a project I had already started or write a chapbook, I decided to start a new short story collection with a concept. All of the stories would be linked to the same alien-hunting organisation over its almost two centuries of history. Pretty ambitious, but my portfolio of short stories would be a taster of that collection.

I was very pleased with my proposal and it’s a project I’ve got in the backburner still. I’ve written a full blog post about that process already, which you can read here.

It got great marks, one of the few A’s I managed to get in my time as a straight B student so I was really galvanised. I couldn’t decide which short story to start with, so I decided to send a document to my dissertation mentor for her to choose her favourite stories. She suggested that I choose the longest one and give it the full 12,000 words. I’m codenaming it Project Bright. It’s a Lovecraftian horror-thriller, set in the 1920s on a fictional Scottish island. My protagonist Avril is a psychiatrist from Edinburgh. After investigating the asylum where her mother spent her last years, she finds that her paperwork has ‘disappeared’. She is invited to the island by the charity’s founder, Sir John Macinally, to collect the papers and take a tour of the facility. When she arrives, she meets other guests who were invited in different pretences. They are hit with the realisation that Macinally wants them dead. They must escape the facility and get off of the island before the every-hungry monster haunting the island can devour them.

In a previous blog post I wrote for Diary of a Young Writer, I said that historical fiction was one of my weakest genres. So why did I choose this one? It was a short story inspired by my first game of Call of Cthulu, led by my friend Sam two Halloweens prior. Call of Cthulu is basically just Dungeons and Dragons but with Lovecraftian mythos, and that game fuelled the love I have for table top RPGs today.

Once I got my proposal marked, I got straight to work drafting. After some edits here and there, I sent some sample chapters to my dissertation mentor and she gave me some further small fixes. I thought it was great, just a few wee fixes left. But that couldn’t have been further from the truth. I showed the full thing to my mother and she was baffled. She’s supported me through thick and thin. She is very honest with me and usually understands what I’m trying to do in each thing I write. She never told me this, but it was straight up not good. Not completely unsalvageable but I was so unwell when I was writing it, and it showed. She had to keep reading it and rereading it to understand what my process was. I felt ashamed that I’d shown something sub-par to my dissertation supervisor and I was ashamed of the workshop piece I wrote, after being so confident they were great. I was under a mountain of stress with other assignments and the pandemic, that this dissertation broke me. I had a breakdown and needed to ask for extensions into August for a December graduation.

Eventually, she had steps for me to take forward. Major editing or rewriting is something I call ‘upcycling’. I’m taking the foundations and materials from something I’ve written already to make something better. And the process this time around was excruciating. There were so many things wrong with it. The characters were 2D and inconsistent. I didn’t have enough of a grasp on where everything was in relation to each other in the setting, I didn’t know how everything moved within the world. Since I see my scenes as film shots, I don’t have an overview on the setting, which was essential as most of the novella is action.

When I was finished with my rewrites, we went through the whole thing with a fine-tooth comb. There were historical facts and technological logistics I had to research too, so we did that together as we went through it. This included things like asylums, fashion and technology in the 1920s. I called my grandfather and stepfather to pick their engineering brains to create a more realistic underground military base and technology of the Foundation. I stayed at my mother’s house for over a month of solid editing. It was so hard for both of us, but we got through it. I added a smaller short story of 2,000 words, which was far easier to edits.

After I handed it in through Moodle, we celebrated. I had some prosecco and watched more My Name Is Earl, the show that got me through the past two months. I stayed for another month or more so she could help me through my last two essays. Asking for the extensions meant I couldn’t graduate until December but I didn’t mind. The fact that I managed to come out of the other side of this project was everything. Plus, Mum did say she’d be happy to help me edit stuff in the future. If anything, it made our relationship stronger.

That August, I got my marks and feedback sheet. I got a B1, which is a really good mark but it wasn’t anywhere near as high as I’d hoped. However, I understood why I missed out on an A and I got some great feedback. The markers liked my world building and evoking of historical context, which meant a lot considering how much I agonised over it. Especially considering my fear of writing historical fiction comes from stumbling into historical inaccuracies. They said that the opening of the story was very solid. The story overall keeps backstory of characters to a minimum, which is a blessing and a curse. It can ensure the storytelling is economical and gets to the point but does come at a cost to some character development. The dialogue was inconsistent. I didn’t sign post my narrator’s grief over a death early on in the story. Action writing is good, but the whole story is too fast. Because the monster is relentless and everywhere, they must always keep moving. Although I feel that that’s most likely how it’d play out, it does mean it’s a bit exhausting to read and doesn’t give enough time for the characters to bond or develop. My appendix at the end of the story is from an in-organisation document written by one of the other characters, imploring their colleagues to take action and depose Macinally from his position of power. They said it hinted at future stories and plot development. That’s something I’ll take as a compliment, as it is part of a short story collection that tells a larger narrative and hints at lore between the lines. But I also hope that this wasn’t their way of telling me, ‘this feels unfinished’.

It goes to show that even something I thought was well and truly a final draft still needed work, but it still stung. I had agonised over editing this for months and had been working on it before that for over a year. I’ve heard that this is a recurring theme for writers, it’s something I’ll just have to get used to. Don’t get me wrong, I am incredibly grateful for the feedback. I’d rather people were honest with me and told me if something needs changed. Like if I didn’t know that my lipstick was smudged all over the place or I had some pasta sauce on my forehead, it would be good for someone to come and tell me discreetly.

As much as I probably won’t be coming back to Project Bright in a while, I’ll be taking this advice going forward into my next editing session. This whole experience has taught me that even if I think a project is done, there’s always more to be done. It takes other people to spot it, as it’s easy to become blinded to your own writing. That’s why writers have editors or agents or beta readers, after all. 10,000 words was biting off more than I could chew at the time, but it’s been great preparation for the gruelling editing process of novellas and novels. I’m hoping to move into more projects next year, so wish me luck! Despite everything, it was worthwhile being a bit too ambitious.

Jen Hughes is a writer from Ayrshire, Scotland who has been fixated on writing since she could hold a pencil. She graduated MA English Literature and Film & TV Studies at University of Glasgow. Her debut chapbook “Keep On Spinning” was published by Dreich Books in 2020. She runs the Starter Quest Podcast with her boyfriend Alessandro Crolla.

Further links to her published portfolio are available on her website jenhugheswriter.com.