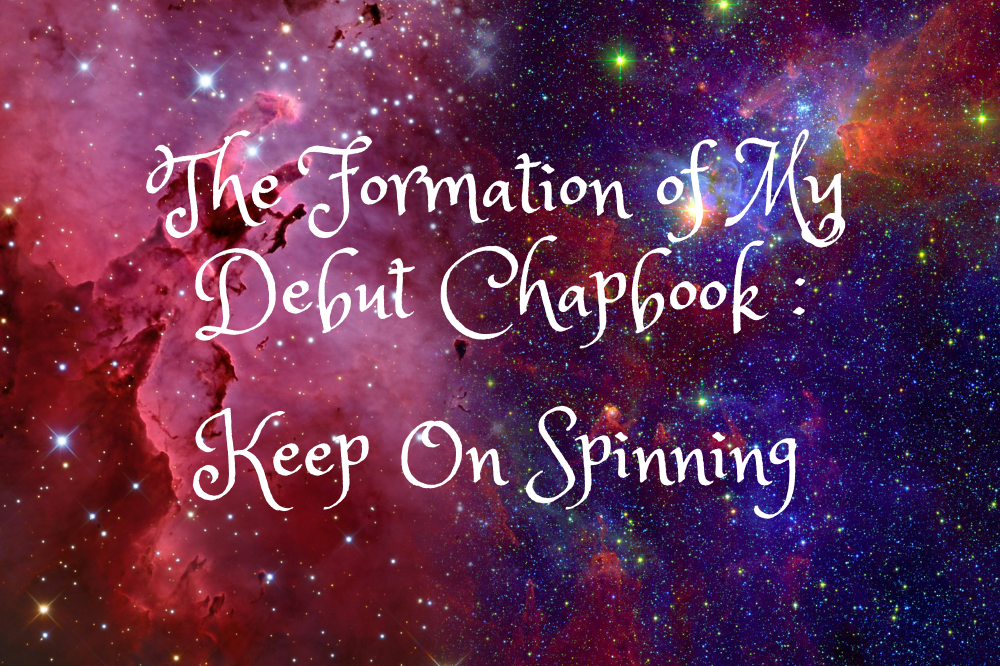 Blog 132: The Formation of My Debut Chapbook: Keep On Spinning

It’s August 2018: the worst month of my life. My paternal grandparents died of cancer a week apart, and at each funeral I had to see my estranged father and his wife. I haven’t had a relationship with them since 2012. My love of karaoke was being strangled by the dismal pubs I was placed in to host nights where nobody wanted to sing or even tap their feet to the music. My imposter syndrome was making me doubt that I was any good at co-hosting Words and Music.

I decided it would be a great idea to perform at open mic nights at Edinburgh Fringe. I didn’t read out any of the serious, emotional poems because I whole heartedly believed that nobody wanted to hear them. All the other poets read out angsty poems and nobody needed to hear mine. My schtick was the ‘Funny Girl’. In the last open mic that I went to, I was put on straight after a seasoned stand-up comic. His set was incredibly sharp. My poems weren’t received anywhere nearly as well as his set was. I didn’t feel particularly welcome, aside from the featured artist who made some small talk with me.

‘Funny Girl’ had been shattered into pieces. You need to be a bit more resilient to perform at the Fringe, especially if you go alone. I wasn’t resilient. I was barely coping as it was. If it weren’t for Gayle’s faith in me, I would have left the poetry scene that night. I was considering giving up on even writing poetry.

It’s September 2018: I started second year at university. I chose my subjects for the year and one of them was a beginner’s astronomy. For an arts undergraduate in University of Glasgow, I had to choose elective subjects on top of your degree subjects to broaden your horizons.

As suddenly as the big bang, I wanted to write poetry again.

I had always been fascinated by space and the stars, and poems began to emerge.

As I learned more about the planets and celestial bodies, poems formed. All my grief, depression, anxieties, trauma, hopes, dreams, love went into them. Poems like “With These Rings” and “Tinfoil Moons” were written during lectures as I was learning about Saturn and Uranus. “Jupiter” was written on a park bench on my way home from a lecture. “My Planet is a Sea of Storms” was written about Neptune after watching a video about it to refresh my memory for the upcoming exam.

It wasn’t long until the motif of the galaxy formed. Each poem spun around in my mind until they were put onto paper. My creativity and lust for life was coming back. I wanted to pursue my writing career again. It wasn’t long before I realised that these poems needed to be part of their own short collection. I had a few poems written already, that acted like the sun that the other poems formed around. Even the poem that is actually about the sun!

By the end of the semester, the collection was assembled, and I thought it was complete. I named it ‘Keep On Spinning’, as that line seemed to come up a few times. For me it meant ‘stay alive, you’ll get through this, things will get better’, which is a theme that the poems orbit.

After drafting each poem and putting it together, I thought that this was how the collection would stay. When I managed to read them at open mics, I gauged the feedback/audience reception and knew that some changes needed made. I submitted some of the poems individually to various magazines and anthology callouts with little success. In 2019, my boyfriend and I went through it and gave in a good edit. Over that year, I would keep tweaking poems. I added some new ones, like “Venus Smirks At Me”. I had originally called it “Venetian Valeyard”. This was a reference to an arc in Doctor Who from 1986 where the Sixth Doctor meets his future self, named The Valeyard. I decided against it as I didn’t think most people would understand the reference. Most of the Keep On Spinning poems that I had submitted as part of my 100 Rejections Challenge were rejected. As much as rejection is a natural part of the process and I was grateful to get closer to that magic hundred, I was beginning to lose faith in the chapbook. Maybe I needed to put it in the drawer and come back to it later.

Then in August 2020: it made the shortlist. I was in the same list as poets I had performed alongside and greatly respected. I was happy to make the shortlist, but I didn’t think I was going to win.

The next day, I was told that I had placed third and as part of my prize was the publication of the chapbook. I was completely blind-sided in the best way imaginable. Now, I was a published writer. I could hold my book in my hands in its ocean blue cover, and what a rush it was.

Then, the process of getting the book published and promoted began. I had to do a lot of my own promotion. It sounds silly in hindsight, but I was convinced my publisher would handle everything. But I rose to the challenge, or at least I did to the best of my ability. I created a few Canva graphics with lines from the poems with planets and stars in the background. I’m proud of them for what they are, but I feel a bit silly that I forgot to watermark them. Oh well. I had fun making them and that’s what counts. They’re still on my Instagram grouped in their own highlight.

I reached out to a whole host of magazines and bloggers in hopes that they will review my chapbook. Most of them either didn’t respond or didn’t have the staff, but a few did bite. It was nerve-wracking having something that I had worked on for two years be scrutinised. I was worried that they would think it was rubbish and tell the whole world that they thought it was rubbish. But it was necessary to promote the chapbook, and to get feedback for what to do next time.

The reviewers gave me some pretty stellar responses, and some even wanted to publish some of the poems. I had dreamed of being published in Headstuff when I started my website, but it wasn’t until now that I succeeded. Not only did they review Keep On Spinning and publish one of the poems (“The Rover”), they also wanted to interview me. It was fascinating to see how they interpreted my work and saw things in the chapbook that I hadn’t spotted.

In ordinary circumstances, my publisher would have arranged a launch. However, because we were living in a pandemic, I was to arrange my own one for when things get back to normal. I could have had one on Zoom, but I wanted to wait until pubs were back open. I didn’t manage to organise one on time because of university work. Now that coronavirus is considered endemic, it’s two years too late. Part of me wants to just arrange one anyway to be self-indulgent but I don’t know if it’s a good idea. If I change my mind, I’ll let you know.

It’s March 2022: Keep On Spinning has been published over a year ago and there’s still a few copies sitting in a box in my office with the envelopes and stamps to send them away. My publisher still prints them on demand and has been selling a few.

I’m hoping to take some to Edinburgh Fringe to the events I’m accompanying Gayle to. I’ve been performing again, piece by piece, and after over two years in lockdown Words and Music is coming back to MILK Café. ‘Funny Girl’ isn’t dead. I have funny poems I like to write and read aloud, but it’s not a crutch anymore. My love for karaoke is coming back, especially now I’ve discovered a wealth of great pop music that wasn’t there when I sang for a living. As much as my father isn’t a part of my life, I have so much love from my family and friends that makes up for that loss and more.

I’m proud of my little chapbook. It’s taught me that my work has a chance at winning competitions, and it’s worth a shot. It helped me process my emotions swirling around my soul at that time and pulled me out of a black star. If anything, I might be oversharing, but I hope that these poems speak to you in some way. They reveal things about my psyche that I hadn’t really thought of.

The publishing of this book is the end of a journey for me, and I’m excited to see where else my brain takes me.

Copies of Keep On Spinning are still available on my website jenhugheswriter.com/shop.

If you’ve enjoyed my work, then please buy yourself a copy.

Some of my poems were published in other places. These include:

Links to each review and the Headstuff interview are in the 2020 Retrospective Blog Post on my website.

The book also has its own playlist. I hoped to play it at the launch before it starts, during the interval and when everyone’s leaving. Oh well. Listen here. If you’ve got suggestions for fun space themed songs to add, feel free to get in touch through my social media.